This page was published on Dec 17, 2014, modified on Apr 1, 2020 by Dr. Reyfman (Pain Management Specialist) of Pain Physicians NY

Extracorporeal Shock Wave Therapy, (or ESWT), is a new technology using shockwaves to treat chronic, painful conditions of the musculoskeletal system. A shockwave is an intense, but very short energy wave traveling faster than the speed of sound. The word “Extra-corporeal” means “outside the body” and refers to the fact that the shockwaves are generated outside the body.

What is Shockwave Therapy?

Extracorporeal shockwave therapy is sometimes alternatively known as shockwave biosurgery, but ESWT isn’t actually a surgery as the word is usually defined or understood in North America. It is a non-invasive and nonsurgical procedure that uses shock waves to treat painful muscular conditions. It works by stimulating the body’s natural healing processes which aid in speeding up healing. Shock wave therapy increases blood flow to the damaged areas, promoting faster muscle and tissue repair.

What conditions can Shockwave Therapy treat? 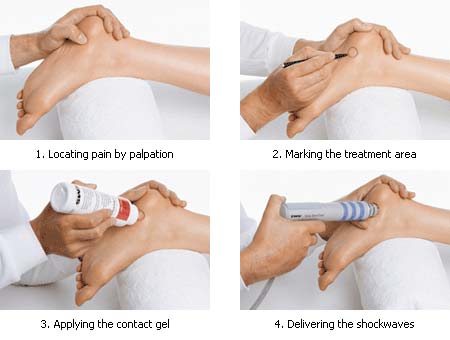 Extracorporeal Shock Wave Therapy can be used to treat a wide variety of musculoskeletal conditions–particularly those involving where major connective tissues attach to the bone.

Complaints involving attachment points for tendons and ligaments in major joints like the shoulder (such as the rotator cuff), elbow (epicondylitis or tennis elbow), hip, and knee (tendinitis or jumper’s knee) are common sites for ESWT treatment.

One of the areas most frequently treated with the ESWT procedure, however, is the foot. Conditions we treat using Extracorporeal Shockwave Therapy include:

And as acoustic wave therapy encourages bone healing, it has been used to help treat:

When is it advised to use Extracorporeal Shock Wave Therapy

ESWT is not typically used in the presence of bone tumors, certain metabolic bone conditions, and certain nerve or circulation disorders.

ESWT isn’t typically used in pregnant patients and locations of an open growth plate, (where the bone is still growing). It’s not currently used in areas where an infection is present, (though there is some early research suggesting shockwaves may actually help with infection).

How effective is Shockwave Therapy?

The vast majority of recent studies suggest that shockwave treatment is highly effective. Most recent independent studies suggest somewhere between a 65% and a 95% “success” range, with values around 80% being the most commonly cited number. It’s important to note that most of these studies have success rates as determined by the patient, himself, in terms of pain and function.

We find that our results with the highly accurate piezoelectric technology, are at least this successful. The most important factor in getting a good result with ESWT therapy appears to be in selecting appropriate patients most likely to benefit from this technology. However, we can’t predict which patients will respond successfully to the ESWT procedure and which ones won’t.

How fast does ESWT work?

We find that many patients get an initial degree of improvement almost immediately following treatment. This effect is usually (but not always) temporary, and is associated with an anesthesia effect from the hyperstimulation of the tissue from the ESWT procedure.

It takes several days for injuries to begin to heal, and many patients see an improvement before the end of the second week. Depending upon your diagnosis, the healing process may take several weeks or even months to be completed, but pain relief often precedes the completion of the healing process.

How safe is Shockwave Therapy?

The basic technology involved with extracorporeal shock wave therapy has been used for decades now on quite literally millions of people. The technology has been used most extensively in Europe, particularly in the German-speaking countries, where this technology originates. In all its use, ESWT treatment of the musculoskeletal system has been found to have virtually no serious side-effects. In fact, even mild side effects like tingling, aching, redness, or bruising are relatively rare, modest and short-lived.

Further, effects like these appear to be more common with higher energy treatments, particularly those from earlier generations of ESWT technology than that which we use. We’ll discuss more about the different shock waves technologies below.

How does Extracorporeal Shockwave Therapy Work?

During EPAT therapy thousands of tiny acoustic sound waves are painlessly applied to the area of injury. The application of acoustic wave therapy creates micro-ruptures in the capillaries of the tendon and bone and significantly increase the body’s response to send healing cells to the area.

The new cells improve the blood supply and the oxygenation resulting in expedited healing of the injury. This is the same technology that has been used in recent years to break up kidney stones without surgery and is now being applied to those with chronic pain and injuries.

This treatment is performed in our pain management clinic in Brooklyn on an outpatient basis and requires no anesthesia.